Today’s vegan stuffed shells recipe has quickly become one of my family’s favorite vegan special occasion recipes! It’s dairy free, egg free, meat free, and quite simple to make. It calls for only 6 ingredients as long as you make the vegan ricotta cheese filling in advance. Plus, it can be made oil-free with just a couple of simple tweaks! 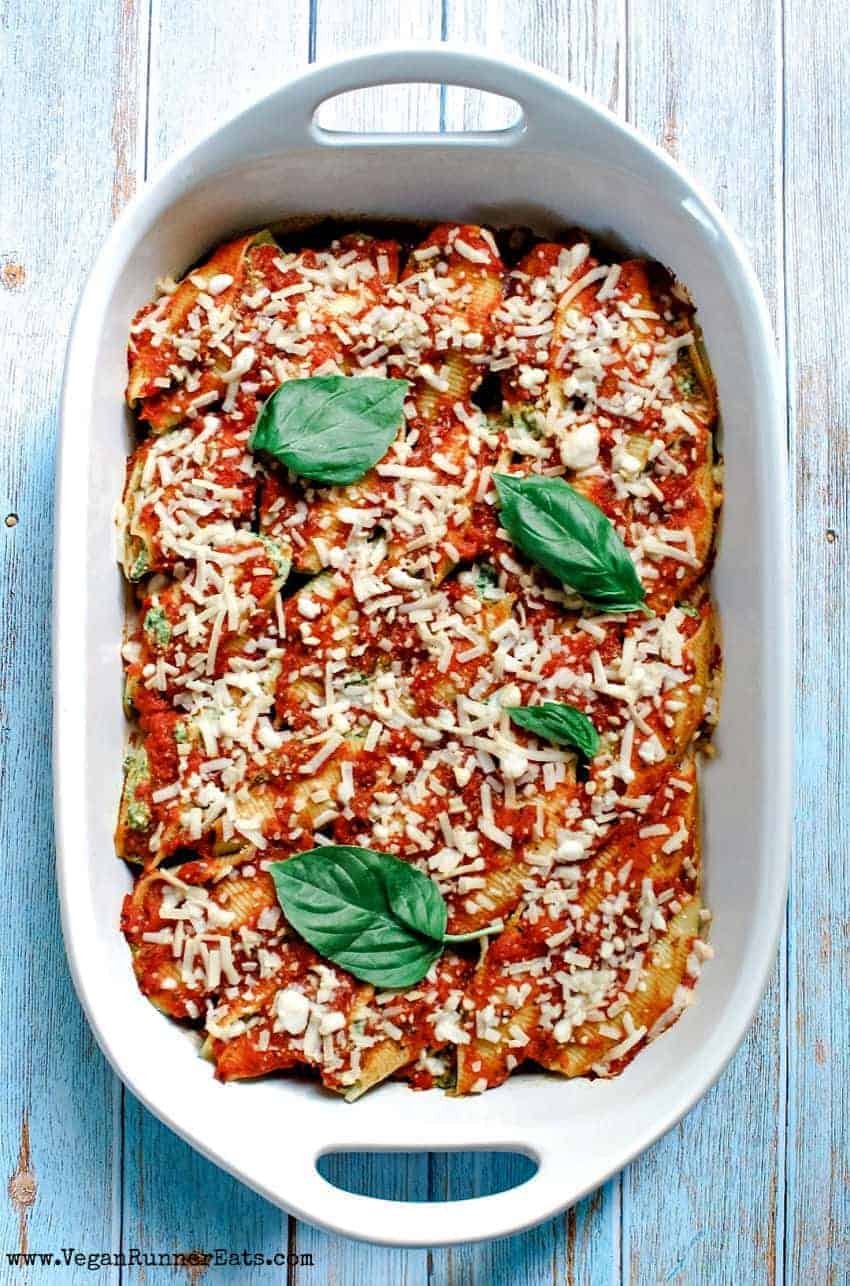 Since I came up with this recipe a few months ago, I’ve served these stuffed shells to both omnivore and vegan friends and relatives to rave reviews from both.

I’m not talking about some polite nods here and there – our guests were oohing and aahing over each bite, amazed by the delicious flavors and impressed by the fact that all of the ingredients were 100% vegan.

Interestingly, I’ve never had stuffed shells before I went vegan. Italian cuisine wasn’t a staple when I was growing up in post-Soviet Russia. Once I moved to the US, I never noticed them on restaurant menus.

Stuffed shells are one of those dishes that’s more likely to be made and eaten at home rather than in restaurants.

Since I didn’t have any friends who’d invite me to a family dinner at their house, I went on to live for years not knowing that such thing as stuffed shells even existed. 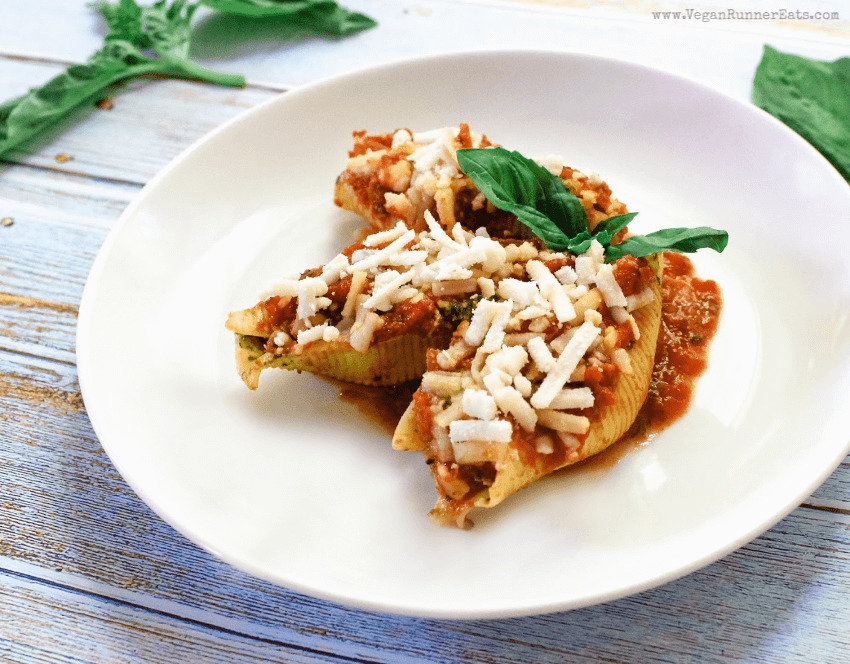 Eventually, however, pop culture and food magazines did their thing, and I became intrigued by this elusive dish. By then I was already vegan, so the staple ricotta and mozzarella cheeses were out of the question.

When I developed my oil-free vegan ricotta cheese recipe, I finally decided to give these shells a try.

The ricotta and spinach filling is a true star of this recipe.

We vegans tend to accept the shortcomings of homemade vegan cheeses as long as they are at least somewhat close to their dairy-based prototypes.

Yet this ricotta filling is absolutely spot-on in flavor ant texture, so much that my non-vegan in-laws could hardly believe these shells were vegan when they tried them. 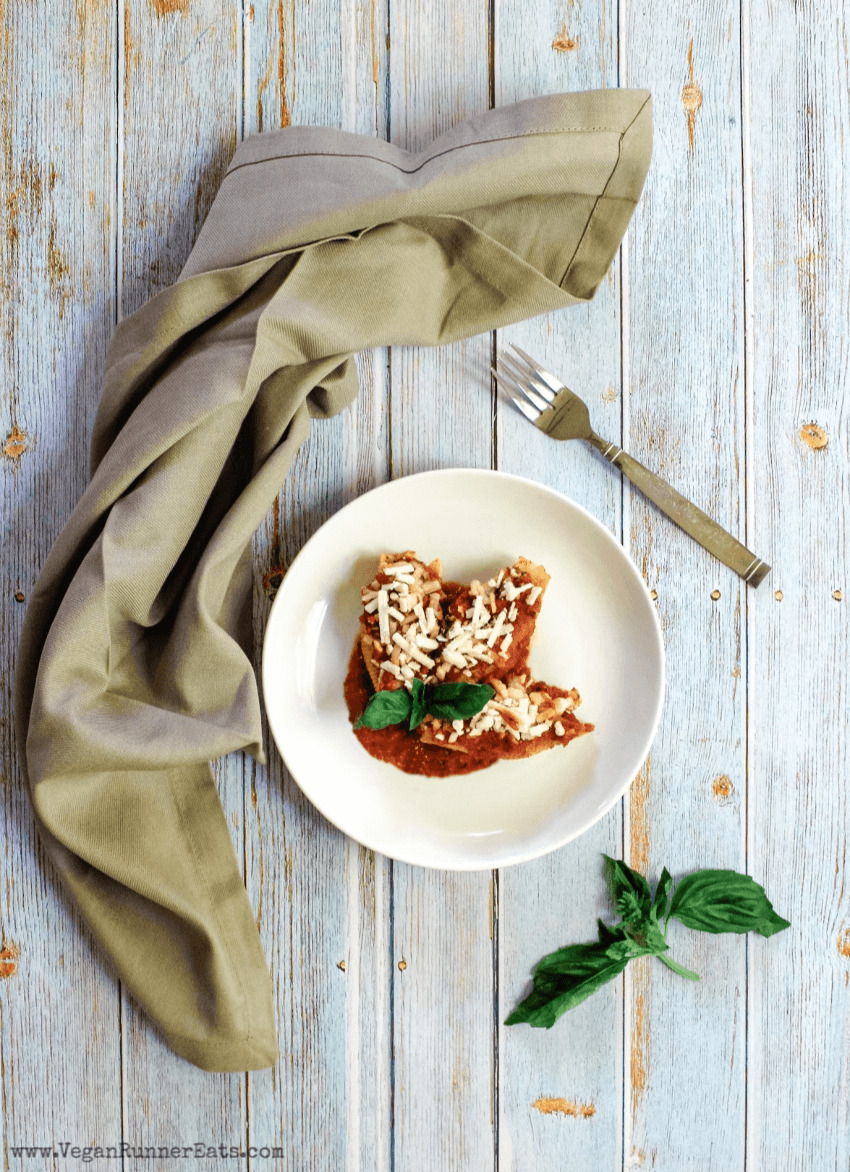 Another big plus of this recipe – it’s quite simple to make! I’ve always loved the flavors of lasagna, but I rarely make it because it’s so time and labor-intensive.

Yet these shells capture every mouthwatering aspect of the lasagna flavors with significantly less effort required!

The same way we’ve decided that we’ll be watching Nacho Libre movie with Jack Black every New Year’s Day. Don’t ask where that idea came from 🙂

By the way, this recipe is featured on my list of 15 kid friendly vegan recipes from the blog that my 2 year-old daughter loves.

What kind of pasta shells are used in vegan stuffed shells?

I use the #95 jumbo pasta shells by Ronzoni in my stuffed shells recipe. The boxes I buy at a local grocery store look a bit different than the one linked up here.

These shells are big enough to hold just the right amount of filling (about 1.5 tablespoons). They cook well until al dente without falling apart.

Note: for the amount of filling in this recipe, I usually cook about four fifths of a 12-ounce box of pasta. That’s about how much will fit into my 9 x 13 casserole dish. If you want to use up the whole box of shells, fill them with a bit less of filling – about 1 tablespoon per shell.

Stuffed shells before baking. Spread the sauce in rows as shown above, or all over the shells (my preferred method).

What kind of marinara sauce is used in stuffed shells?

I’ve tried making my stuffed shells with a few store-bought brands of marinara sauce, and my current favorite is this one by Mezzetta.

It works well in other pasta dishes as well. It’s not oil-free though, so if you’re trying to avoid oil, you may need to look elsewhere, or make your own marinara sauce.

What kind of cheese is used in vegan stuffed shells?

For the filling, I use my vegan cashew-almond ricotta cheese, and blend it with spinach (see proportions in the recipe card below).

For topping, I use store-bought dairy-free Mozzarella Shreds by Follow Your Heart brand. It melts well, and doesn’t give the final dish an odd plasticky aftertaste like some other shredded vegan cheeses do. I’ve been using it on homemade pizza too.

If you’ve tried your hand at making your own vegan cheese at home and found a good meltable vegan mozzarella recipe, feel free to use that instead. Or omit it altogether – these stuffed shells will taste just as good without extra cheese on top.

Vegan stuffed shells just before being baked in the oven

Yes! The homemade cashew-almond ricotta cheese is oil-free by default. To cut the oil out completely, use oil-free marinara sauce, and skip the store-bought mozzarella shreds on top.

Whole food, plant-based dinners have never tasted as decadent as these stuffed shells 🙂

Can stuffed shells be made gluten-free?

Once again – yes! You’ll need to use gluten-free jumbo pasta shells here – they may be tricky to find though. I’ve heard of Tinkyada jumbo shells made from brown rice, but I haven’t tried them myself.

My homemade cashew-almond ricotta and Follow Your Heart brand Mozzarella Shreds are gluten-free by default.

Check the ingredients of your store-bought marinara sauce, or make it at home to make sure it’s gluten-free for sure. 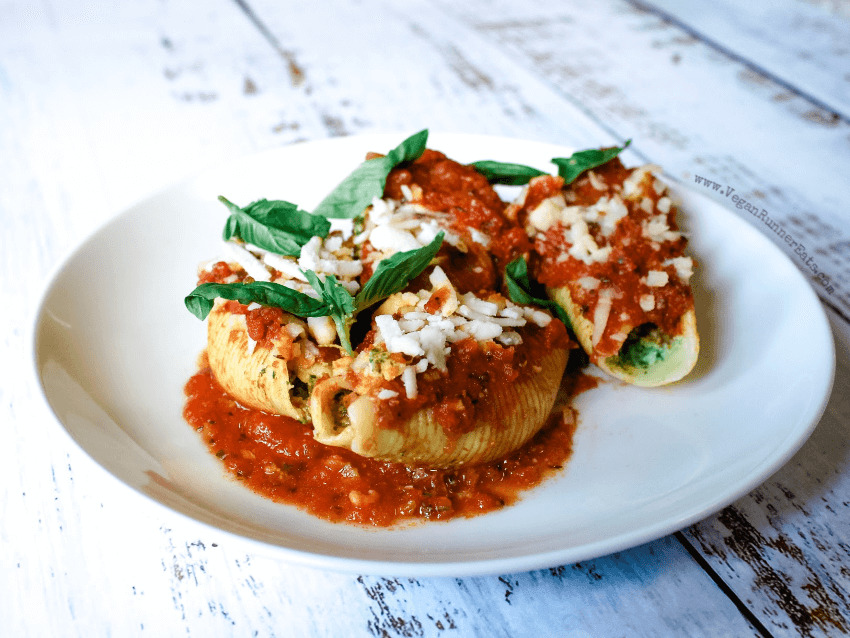 More Italian-inspired recipes from the blog:

*I usually end up with a few empty pasta shells once the filling runs out. To avoid wasting pasta, make about 4/5 of the 12-oz box.

Please note that the provided nutritional information doesn't include the cashew-almond ricotta cheese info. All numbers are approximate. 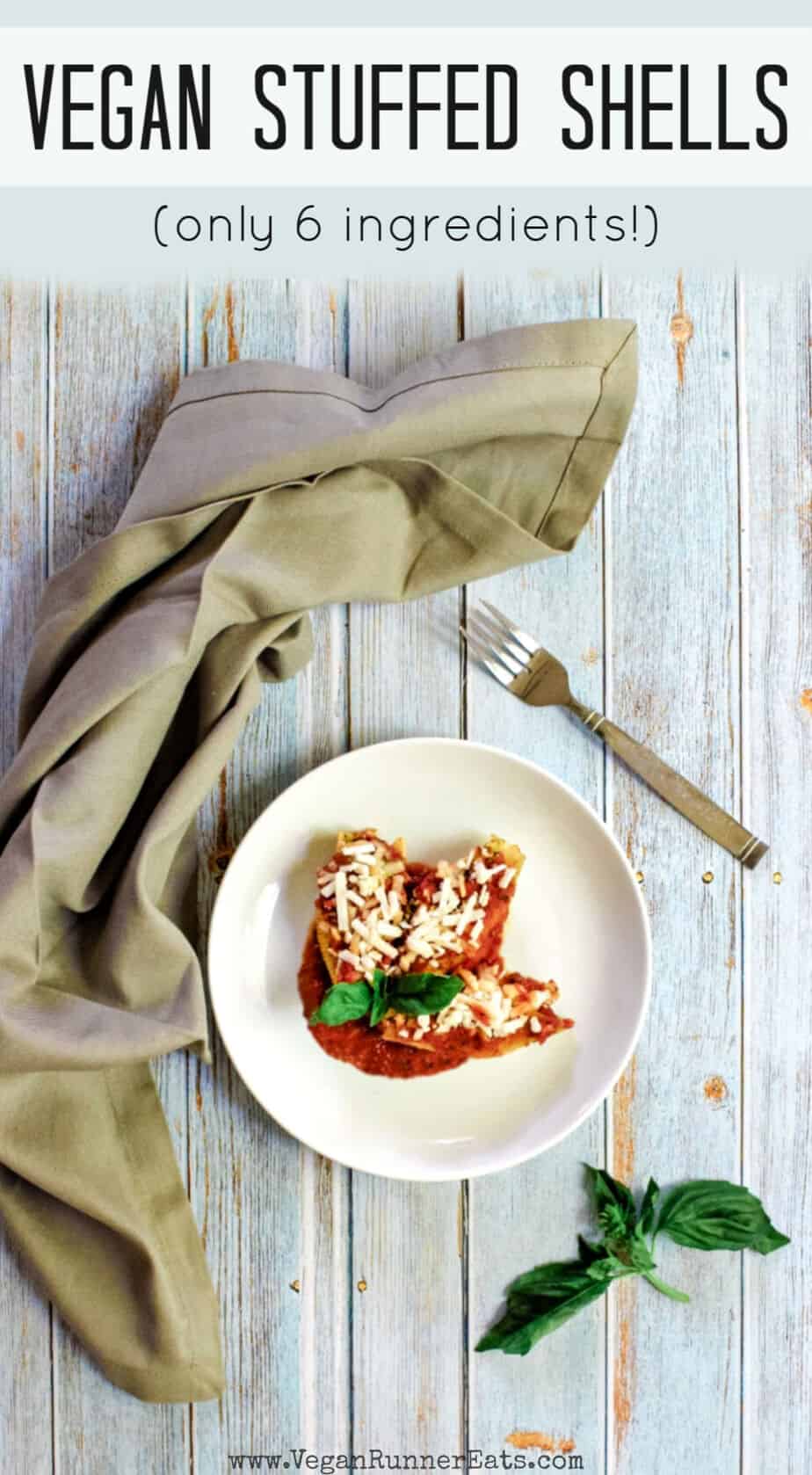 Hi Alina! I have a question. I see that your ricotta recipes yields 2.5 cups. If I decide to be lazy, because, um....well....I AM...can I use the same amount of store-bought vegan ricotta? Thank you!

Sure, that should be fine! If you try this, can you please let me know how it worked out?