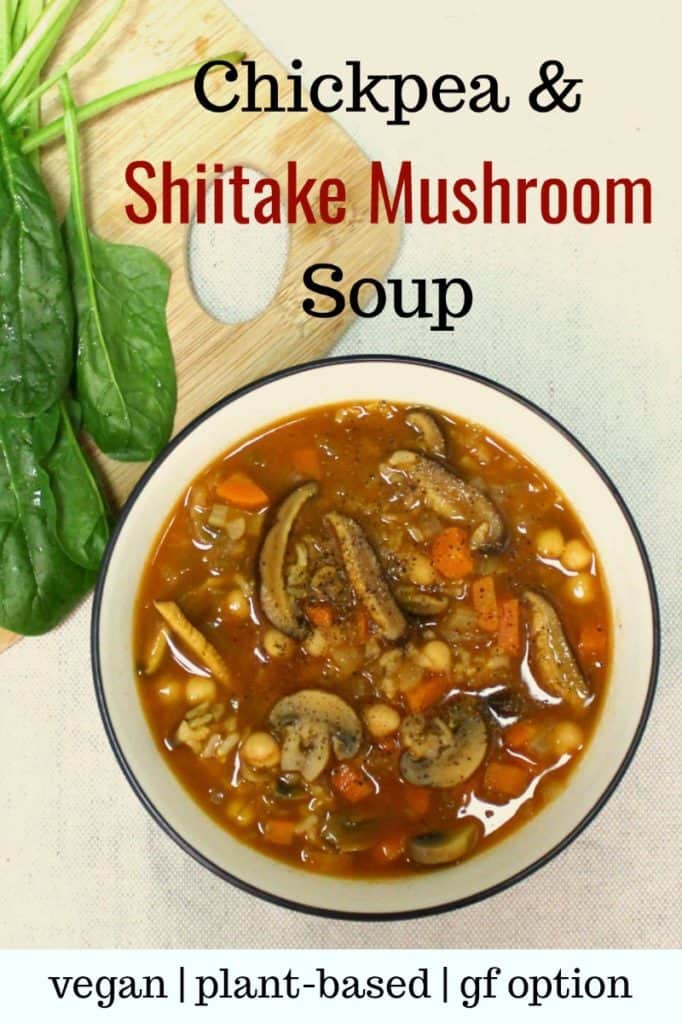 Today’s vegan mushroom barley soup recipe has quickly become one of our family’s favorite soup recipes. It’s hearty and filling, entirely plant-based, oil free, kid friendly (my toddler eats every last spoonful!), and better yet, it can be made both in the Instant Pot and on stovetop.

I’ve mentioned before that I could eat soup any time of the year, and I truly appreciate the fact that soup always makes great leftovers. Less time stressing over what to bring to work for lunch = happy and pleasant me.

I’ve always been a fan of chunky vegan soups because they make a full meal in one bowl. This soup is quite different from traditional creamy mushroom soups popular in the US because it has a tomato base with the additional ingredients like chickpeas, barley, and spinach.

Whenever I make this vegan mushroom soup recipe, I almost have to hide the soup pot after Rob and I have a couple bowls 🙂 This chunky mushroom soup is so good that we would gladly wolf down the whole pot and not leave any leftovers for the following day!

I’ve made different variations of this soup in the past months, but it all started as an attempt to recreate one of my favorite soups form my childhood.

My parents used to make this hearty and delicious soup with rich cuts of lamb or beef back when I was a wee lass growing up in Russia. We called it kharcho (харчо in Russian) – if you Google it, it comes up as ‘Georgian lamb and rice soup’ (Georgia being the country in the Caucasus mountains, not the Southern US state).

I continued making this soup after I moved to the US long before Rob and I entertained any thoughts about going vegan. Rob absolutely loved this soup, and every pot of it never stayed around for too long in the fridge.

Then our vegan days came. Although I was excited to discover so many delicious new plant-based dishes, I kind of missed the rich flavor of kharcho every now and then. What I didn’t miss was all the fat from oil and rich cuts of meat that saturated this soup.

For a while, I was sure that recreating this rich flavor in a vegan way was an impossible feat, especially if I wanted to make it oil-free. (See why I prefer to cook with no oil over here.) I kept trying though, and eventually this recipe was born!

The combination of tomato paste-based broth, mushrooms, chickpeas and rice gives this soup the exact richness I was looking for, no oil or added fat needed.

To make the soup even healthier, I top each bowl with a generous handful of chopped fresh spinach.

Why adding spinach before serving the soup, and not when it’s still cooking? I find that spinach wilts very well when added to a piping hot broth, and adding it to the pot of soup while it’s in progress tends to overcook spinach.

If you don’t want to top each bowl with fresh spinach, however, you’re welcome to stir it in right after you take the pot of soup off the heat.

Sprinkle each bowl with black pepper, chopped parsley or scallions, and you’ll get exactly the soup I grew up loving so much! Except for this time, it will be meat-free and much healthier.

What kind of mushrooms are used in this vegan mushroom barley soup?

I use sliced shiitake mushrooms in my vegan mushroom barley soup, but cremini mushrooms will work as well. Shiitake mushrooms make a great substitution for meat strips in the traditional meat-based version of this soup thanks to their chewy texture.

You can use either fresh or dried shiitake mushrooms here. Dried shiitakes tend to run cheaper, so feel free to use those to save some money.

UPDATE March 2021: I recently ran out of all shiitake mushrooms and made this soup with sliced fresh cremini mushrooms. It worked out perfect! Feel free to use cremini (a.k.a. baby Bella) mushrooms instead of shiitakes here.

Can I use other types of greens in this mushroom barley soup?

Of course! I often use chopped kale in this recipe in place of spinach. The only difference in preparation is that kale needs to be added about 5 minutes before the soup is done, not right at the end of cooking as spinach does.

Can I use another type of beans in this vegan mushroom barley soup recipe?

Yes. Sturdier beans like kidney beans will work best because they keep their shape better, but cannellini or Great Northern beans can be used as well as long as you add them closer to the end.

For clarification, I’m talking about cooked or canned and rinsed beans, not uncooked dried beans.

Yes! I can’t vouch for all kids, but my 2 year old toddler eats every last bit in her bowl. It didn’t start that way – at first she only picked out potatoes and chickpeas, but now it’s one of her all-time favorites.

See other kid friendly vegan recipes from the blog that my toddler has approved.

Recently I adapted this recipe for the Instant Pot, and I have to say that this soup comes out even more delicious when pressure cooked! The recipe card below includes both Instant Pot and stovetop directions.

In case you have an Instant Pot but don’t feel very confident cooking in it yet, see my easy-to-follow 5-step guide to using an Instant Pot for beginners.

1. In a small bowl, pour boiling water over shiitake mushrooms, set aside to soak for 10-15 minutes or up to 1 hour.

2. Mix all the spices in a small bowl, set aside.

3. Press Saute button on your Instant Pot. Once the inner bowl is hot, add 1-2 Tbsp water/broth (or oil if using). Add diced onion, carrots and celery, saute 3-4 min until the onion is translucent. Mix in 1/2 of the minced garlic and 1/2 of the spice mixture, saute 1 min.

4. Add shiitake mushrooms, barley or rice, cubed potatoes, red lentils, tomato paste, veggie bouillon**** if using, and 6 cups of broth (if we add all broth at once, it will take longer for the IP to reach high pressure). Press Cancel button.

5. Lock the lid in place, making sure that the vent lever is set to pressure. Press the Manual button and set the timer for 4 minutes. Once the time is up and your Instant Pot beeps, follow 10-minute natural release opening method (let the timer reach 10 minutes, then press Cancel and carefully turn the pressure knob to release steam - be careful not to burn yourself when the steam starts coming out!).

6. Open the lid. Press Saute button. Add cooked chickpeas, two additional cups of broth, spinach or arugula, and the rest of the garlic and spices. Bring to a boil briefly, then press Cancel. Taste and adjust the seasoning.

7. Let the soup rest for 10 minutes before serving. Enjoy!

1. In a small bowl, pour boiling water over shiitake mushrooms, set aside to soak for 10-15 minutes or up to 1 hour.

2. Saute diced onion, celery and carrots in a large heavy-bottomed soup pot with 1-2 Tbsp of water/broth or oil until the onion is translucent, 3-5 min. Add minced garlic, saute 30 seconds longer. Mix in tomato paste; stir the mixture until the paste is well incorporated. Add rinsed brown rice or barley and lentils, if using. Add all of the spices and cook until fragrant, about 1 min.

3. Meanwhile, slice the soaked shiitake mushrooms into 1/4 inch thick strips. Add them to the soup pot along with cubed potatoes and chickpeas. Pour the water or broth over the mixture. Add veggie bouillon/low sodium soy sauce if using.

4. Bring the soup to a boil, reduce the heat to medium-low, and simmer for 15-17 minutes. The soup is done when the rice/barley is soft, and the potato cubes can be easily split in half. If the soup looks too thick, add more water/broth and bring to a boil once more.

5. Taste the soup, adjust the seasoning. Stir in chopped spinach or arugula***** and/or parsley if desired.

*I prefer using dried shiitake mushrooms because they have a chewier texture once cooked, plus they are more affordable than fresh shiitake, and have a long shelf life. Alternatively, sliced crimini mushrooms can be used, about 1 1/2 cup.

****Or substitute with 1-2 Tbsp of low sodium soy sauce (or tamari for gluten-free).

*****I find that hot soup broth does a good job wilting fresh spinach/arugula, that’s why I suggest using it when serving the soup. Alternatively, you can add the greens to the soup just before taking it off the heat.

Hope you enjoy my vegan mushroom barley soup with spinach and chickpeas!

Hi Alina! So happy I came across your blog! I love soup and was a big fan of kharcho growing up (although I always picked the meat out haha) and since becoming vegan I love to introduce yummy homemade food that elicit childhood memories for the fam! Can’t wait to give this one a try!

That's great, Liana! Please let me know how you like it if you make it!

Can this keep in fridge for 5 days?

Yes, I've kept it in the fridge for at least a week before, and it was still fine.

The instructions, paragraph 4. it mentions potatoes. Are there supposed to be potatoes in this recipe?

Good catch, Sharon! Just edited the recipe to add potatoes. However, they can be left out if you wish.

Hello! Alina. Your recipe are wonderful. I too have a vegetarian food blog. Please visit if you like

Awesome, Corinna, thank you for letting me know! It's one of our favorites too!