A couple weekends ago I hosted my vegan baby shower. At 7.5 months pregnant, it was no easy task, but in the end everything turned out wonderful!

Today I’m sharing how I managed to put together a delicious vegan vegan baby shower menu for this party that was enjoyed both by vegan and omnivore guests, plus the food prep schedule I used to make it all happen.

To be honest, the idea of a baby shower has stressed me even more during this pregnancy than the thought of eventually going into labor 🙂

There were a few reasons for this: I’ve never entertained more than a handful of people at once at my home, wasn’t sure what to do with the menu and cooking (of course I wanted all the food to be vegan, plus it had to be delicious to impress even the non-vegan guests), plus the party entertainment aspect was completely foreign to me.

I’ve heard people say that if it stresses you so much, then you don’t have to do it, but as someone who wasn’t born and raised in the US, I felt like a baby shower was a ‘rite of passage’ of sorts for all American mothers-to-be.

Since I’ve tried to ‘fit in’ in the American society for as long as I’ve lived in the US (hashtag #priorities 🙂 ), I felt like I had to have a baby shower at all costs, stress be damned 🙂

I heard advice of looking up baby shower ideas on Pinterest, but as much as I love this site for all kinds of vegan food-related topics, I found myself totally overwhelmed with over-the-top decorating and menu ideas that seemed to require unlimited free time (hard for me to find since I’m still working full time) and possibly a team of designers and chefs to pull it all together.

I decided to keep my decorating attempts to a minimum, and focus on the food instead.

Here I ran into some trouble. After an unsuccessful attempt to hire a vegan caterer for my shower, I realized that I had to make the food myself. Thankfully, my friend Jill offered to bring lots of vegan cupcakes and some additional food. A trip to a local party store took care of decorations.

As for the entertainment, my friend Liz agreed to set up games and a few additional special touches that make baby showers memorable – the kind of stuff that I would have never thought up myself 🙂

So before long, the shower was here!

The menu was planned out in advance – I wanted most of the things to be individually portioned as ‘finger foods’ for the guests’ convenience and decorative appeal.

The weekend before we did a major grocery run to get all the essentials. I set out the exact schedule of prepping the food for the big day, which turned out very useful and helped reduce my stress by a lot during the shower week. I’m sharing this schedule below FYI.

By the way, did you know that you can now create a baby registry on Amazon? It’s free to sign up, plus you get lots of perks:

Check it out here

Here’s what made the final menu, as seen in this photo:

7) 2 types of no-bake cookie bites – chocolate (based on a no-bake brownie recipe from The Abundance Diet cookbook by Somer McCowan) and tropical pineapple-coconut (I just wing this recipe whenever I make these, need to write it down and post it some day);

8) An assortment of dips – homemade guacamole and store-bought hummus and salsa, served with tortilla chips;

9) Thai peanut noodle salad with vegetables, made by my friend Jill;

11) (Not pictured here, see top photo) Jill’s famous homemade vegan cupcakes! She made a dozen each of coconut-lime, chocolate, maple walnut and cappuccino – bless her heart!

Because I’m still working full-time, my intent to prepare all the food for my baby shower had to be calculated to make sure I made the best of the limited free time I had available every day during the week of the party. Here’s what my food prep schedule turned out to look like:

1. The weekend before the shower: a big grocery store trip to stock on most ingredients except for the perishable stuff. Think: crackers and vegan cheese – yes, fresh spinach and bread – no.

– Go to the grocery store to buy the rest of the ingredients needed (fresh spinach, arugula, bread, and anything else still needed).

4. Saturday morning (day of the shower):

– Boil unpeeled baby potatoes first thing in the am. Drain, set by an open window to cool.

– Take a break if the time allows – you’ve already done a lot!

– About 1 – 1.5 hours before the shower, start assembling the food and setting it on the table. Make chickpea salad pinwheels, BLT bites. Assemble bruschetta toasts. Portion out the potato salad into individual clear cups (or set out the whole bowl). Set out the mini quiches, cookies (baked chocolate chip ones and both types of the no-bake varieties). Set out guacamole, hummus, and salsa along with tortilla chips. Arrange the cheeses on a cheese board, set out along with assorted crackers.

– Don’t forget paper plates, serveware and drinking cups! (I skipped the Pinterest-popular idea of making a punch/special beverage in a large container, and set out a cooler filled with various drinks like Sanpellegrino sodas, LaCroix, some juices, etc.)

– If anyone brings any additional food, set it out on the table as it arrives.

– If you have an extra 15 minutes: put out little cards naming each type of food. I was going to do that – even printed out some cute animal-themed cards from Pinterest! – but ran out of time before the guests started arriving.

I really hoped to prove that all-vegan baby shower menus could be a success, and it brought me so much joy to see how much the food was enjoyed both by my vegan and non-vegan guests.

Even though it took some effort to make it, I was glad to have food that everybody could eat, including myself. I’ve heard a few sad stories of when a vegan mom-to-be couldn’t eat anything at her baby shower thrown by relatives or friends because they didn’t provide any vegan options for her 🙁

Also, I’m certain that this menu and schedule could be easily used for any type of party other than a baby shower. If you try it, please let me know!

Once our bellies were full of food, we played some games, talked to my mother-in-law over Skype (she was throwing a shower for me in New York at the same time), and of course opened the presents. Guess which color dominated? 😉

After the party was over and the guests left, I told Rob: ‘Well, now it’s for the easy part – have the baby and raise her!’ We’ll see how that goes 🙂 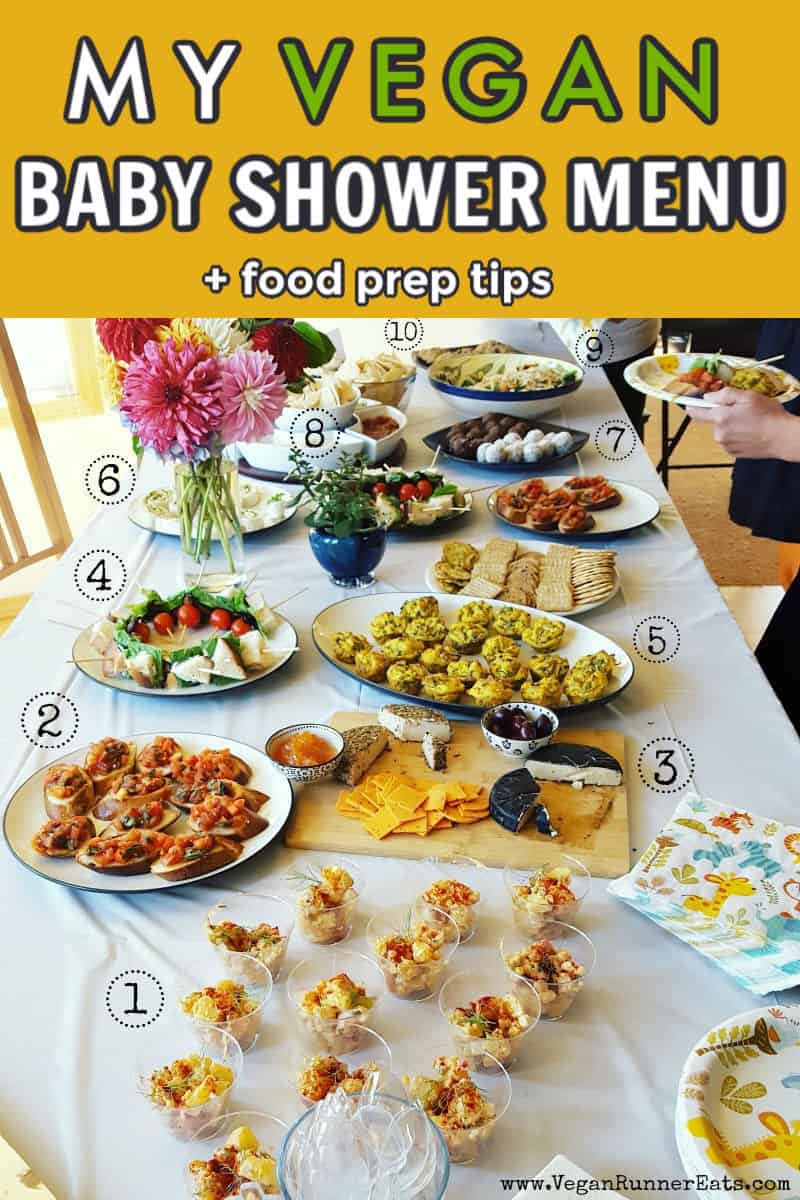 Photos in this post are courtesy of Beth Clifton.

Thank you so much for sharing your party menu. I am getting ready to host a baby shower for my daughter in law who is a vegetarian and had no idea what I should plan for food. Now 8 have some ideas and am sure that the baby shower will be a special occasion for her.

Awww you're welcome Karla, and congratulations on a future grandbaby!

Would you be able to share the Thai Noodle Salad recipe?

My friend Jill made it, so I'm not sure what exactly she put into it. I might experiment with making my own recipe and share it here on the blog soon though.

This looks like a fabulous party! But on the recipes that weren't vegan (like the Artichoke Spinach mini quiches), how did you substitute for the eggs and mozzarella cheese?

Hi Sheryl, thanks for your question! I used a vegan spinach-artichoke frittata recipe from Everyday Happy Herbivore cookbook by Lindsay Nixon, and baked the frittata mixture in a mini-muffin pan. If you don't have that cookbook, I've seen lots of similar recipes for vegan quiche/frittata on Pinterest.

Congratulations Alina! Judging by the photos, I am sure the shower was a hit and the food absolutely delicious! You were blessed with some very nice gifts for your little angel!

Thank you Nadege, glad to hear from you again!

What a great party! I love all your food ideas! I'm definitely pinning this for a future party.