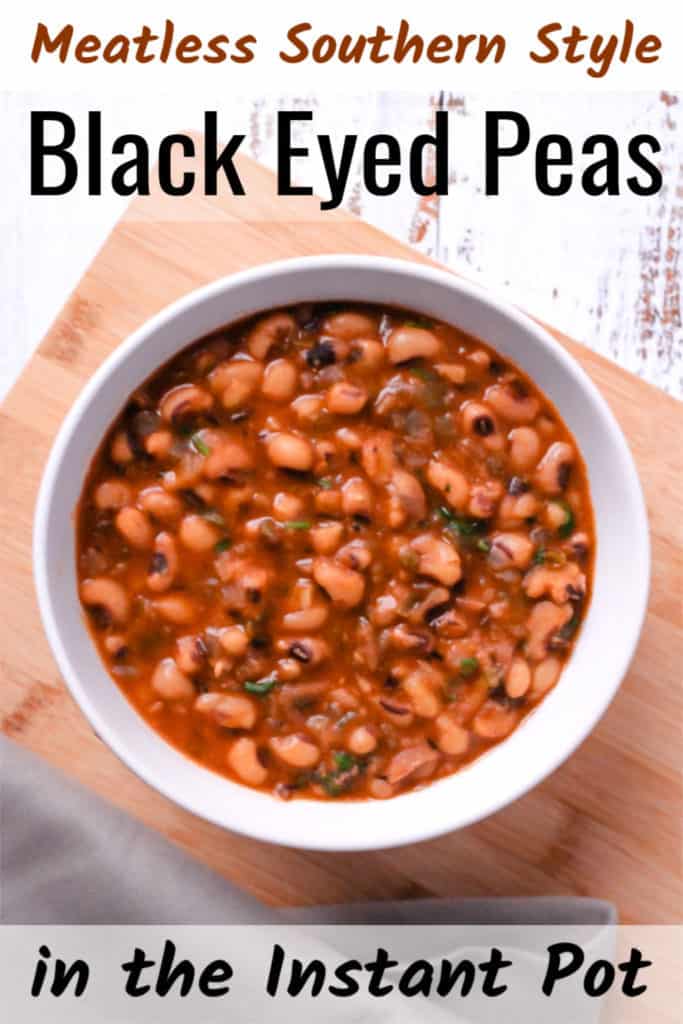 How to make the best Southern-style black eyed peas in the Instant Pot.

This recipe is easy to make (you don’t even need to soak the beans!) and yields deliciously smoky and flavorful plant-based black eyed peas. A healthy and easy vegan soul food recipe that’s gluten free, soy free, low fat, and high in protein and fiber.

The great thing about this vegan black eyed peas recipe is that it can be used to make a side dish to go with your favorite comfort foods, or as a standalone main course – think a simpler version of a classic chili.

Don’t have it in you to cook my high protein vegan chili or three bean and barley chili? Just make a pot of these black eyed peas, and top them with some diced avocado and red onions.

Don’t have an Instant Pot? These black eyed peas can be made on stovetop – scroll down to see the stovetop cooking instructions.

This recipe is a part of my collection of healthy vegan recipes made with easy to find vegan pantry staples you most likely have at home right now.

The tradition to eat black eyed peas on New Year’s Day comes to us from the Southern United States. There are a few versions of how this tradition was started.

By and large, the people of the 19th century American South have black eyed peas to thank for helping them survive the tough times of the Civil War when food supplies were short.

According to Southern superstitions, having black eyed peas, collard greens and cornbread (or grits) on New Year’s Day dinner will bring you prosperity and luck.

What are health benefits of black eyed peas?

Like all beans, black eyed peas are one of the healthiest plant-based foods out there. They are a good source of soluble fiber – the kind that gets absorbed into our bloodstream and cleans out our arteries from cholesterol.

In addition to that, black eyed peas are a good source of plant protein (13 grams per one cup serving), and have less than one gram of fat per serving.

Do I need to soak black eyed peas before pressure cooking?

In short – you can, but you don’t have to. When black eyed peas are pressure cooked, they soften pretty quickly even if you didn’t soak them in advance.

As you can see, my recipe for vegetarian black eyed peas below will take about 5 minutes for pre-soaked beans in the pressure cooker, and 18-20 minutes for dried beans.

If you plan to cook this Southern black eyed peas recipe on stovetop, soaking them beforehand will make a big difference time-wise.

So, if you decided to pre-soak your black eyed peas before proceeding with today’s recipe, here are a few pointers.

How to pre-soak black eyed peas:

A faster soaking method – pour boiling hot water over your black eyed peas, let soak for 3-4 hours, or until they feel ‘springy’ to the touch. Drain, discard soaking water. This is my go-to method for soaking this type of beans.

The fastest soaking method – bring a medium-sized pot of water to a boil. Add dried black eyed peas, cook for one minute. Turn off the heat. Let sit for an hour, then drain and rinse.

What are the benefits of pre-soaking beans?

There are at least two benefits of pre-soaking beans.

Benefit #1 – pre-soaking helps break down some of the nutrients that cause bloating and gas.

Beans contain a certain type of sugars called oligosaccharides that is hard for our bodies to digest.

Once oligosaccharides pass through our digestive system and reach the small intestine, bacteria starts breaking them down, releasing gas in the process.

I don’t know about you, but being gassy is not my cup of tea 🙂

Benefit #2 – pre-soaked beans don’t burst as much during cooking as the beans cooked from scratch, which makes the cooked beans look prettier.

If the look of your cooked beans isn’t that important to you, feel free to skip pre-soaking.

See my post about how to cook dried beans from scratch to learn more about making beans even healthier and easier to digest.

How do I make vegan Instant Pot black eyed peas?

First, you need to rinse your dried black eyed peas and pick them over to remove little rocks, bits of dirt, and whatever else may hide in them.

(For ingredient amounts and a printable version of this recipe, scroll to the recipe card below.)

After that, press Saute button on your Instant Pot (it may be called something else on other pressure cookers). Heat a bit of grapeseed or avocado oil (or veggie broth/water if you don’t cook with oil).

Mix in tomato paste, smoked paprika, thyme, liquid smoke (optional – feel free to omit it if you don’t like it), and a dash of cayenne pepper.

Add rinsed black eyed peas and water/veggie broth. This recipe comes out great with Better Than Bouillon Vegetable stock base.

Lock the lid in place, making sure that the vent lever is closed. Press the Manual button and set the timer for 20 minutes. It will take around 10 minutes for the pressure to build.

Once the time is up and your Instant Pot beeps, follow 10-minute natural release opening method. If you’re not familiar with pressure release methods, see my 5-step guide for using an Instant Pot for beginners.

Carefully remove the lid. Stir the beans, adjust the seasoning to taste. Mix in cilantro and a few dashes of black pepper.

Serve with plenty of your favorite hot sauce OR a squeeze of lemon juice if you don’t like your black eyed peas too spicy.

Can I make this vegan black eyed peas recipe without an Instant Pot?

You sure can! You’ll need a medium-sized heavy-bottomed saucepan or a Dutch oven.

Follow the steps for sauteing the vegetables as described above or in the recipe card below. Then add the rest of the ingredients except for cilantro and hot sauce.

(For ingredient amounts, scroll to the recipe card below.)

Bring the bean mixture to a simmer, and cook over medium heat, stirring often to prevent burning. It will take 1 hour or longer for the black eyed peas to soften if you’re using dried beans, or 30-40 minutes if you’ve pre-soaked the beans.

Once the beans are soft, taste for seasoning and adjust to your liking. Mix in cilantro and sprinkle with black pepper just before taking the pot off the heat.

Serve with hot sauce and/or a squeeze of lemon juice at the table.

*Better Than Bouillon contains soy, and may potentially contain gluten. Omit it if you need this recipe to be 100% soy and gluten free.

If you’re making them for the Southern style New Years celebration, Happy New Year to you!

Thank you! This recipe was yummy. I served it over rice. I’ll definitely make this again.

Thank you for letting me Know, Susan!

Hi, do you need less broth if cooking pre-soaked peas?

Hi Cheryl! Yes, feel free to reduce the amount of liquid by at least 1 cup. Please let me know how it turns out!

Delicious!!! I made this on New Year’s Day and oh my goodness, everyone including my carnivore brother went for seconds! I don’t have an instant pot so I just cooked the black eyed peas according to the package. Turned out so good I’m making more as my meal prep for the week :)

That's fantastic, thank you for telling me, Andrea! Glad your whole family liked it!