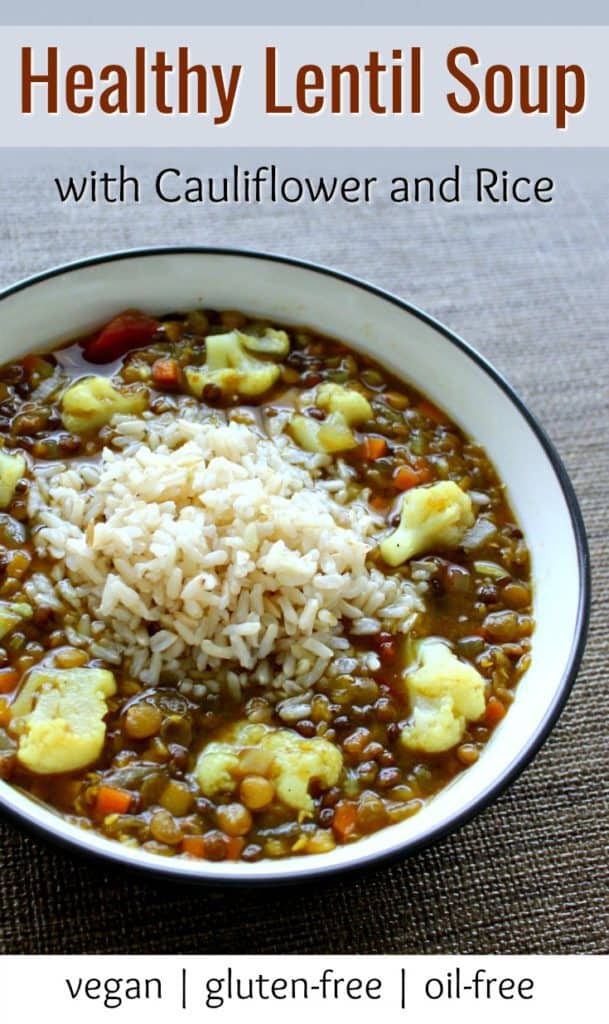 Not long ago Rob and I were returning home late at night after a day trip. This was just a few hours before the entire Gulf Coast area was hit with an ice storm, so the temperature outside was rapidly dropping.

Rob said that he wanted to have some warm soup for lunch the following day. I was surprised by his request because he hardly ever eats soup for lunch, let alone specifically asks for it. He usually prefers sandwiches for lunch – my easy vegan chickpea salad sandwich recipe is his all-time favorite.

I promised him to make some kind of soup by lunchtime the following day but realized that we didn’t have a lot of groceries at home since we skipped our usual grocery trip on the weekend.

When I took a look around the house, I found just enough ingredients to make this healthy lentil soup. It turned out to be delicious and easy to make – one of those perfect vegan lentil recipes that make a great lunch and dinner.

That day turned out to be the first snowy day in Southern Alabama in years and years. I saw the snow on the Eastern Shore of Mobile Bay for the first time since moving to the Gulf Coast area 7.5 years ago!

We had to wait three more days before we were able to go to a grocery store: some of the roads were undrivable because of the ice, and most businesses (including grocery stores) were closed. I had two things to be thankful for:

1. That we live in quiet suburban area that doesn’t get crazy with traffic – things didn’t get nearly as messy for us as they did in Atlanta;

2. That even with what I consider ‘an empty fridge’ I was able to make decent plant-based vegan breakfasts, lunches, and dinners for those three days, including steel-cut oatmeal, blueberry cornmeal muffins, vegan mac and cheese, kidney bean croquettes, Pad Thai, and the delicious vegan lentil and cauliflower soup that I’m featuring today. I knew that my giant stash of dried beans in my pantry would come in handy one day!

By the way, here’s my tutorial on how to cook dried beans from scratch.

As of Thursday and Friday, my town is back to its normal life. The snow is almost all gone (there wasn’t much to begin with), all of the businesses are open, and my fridge is stocked with vegetables for more culinary adventures!

This recipe is one of my 2 year old daughter’s favorite recipes from the blog! See the full list of 15 of my kid friendly vegan recipes that she loves.

I’m not using any oil here to saute vegetables in the first step, but if you aren’t averse to oils, feel free to use them instead of the veggie broth. Honestly, I find that soups don’t lose anything when made with no oils, but it’s ultimately up to you.

For a different take on a “lentil + a vegetable” kind of soup, check out my vegan Instant Pot lentil soup with spinach.

Top your bowl of this lentil and rice soup with some chopped cilantro and diced avocado, and you got yourself a healthy and filling meal complete with protein, healthy fats and carbs, plenty of fiber – and a whole lot of yum 🙂

Looking for more vegan soup recipes? Check out my vegan minestrone and vegan chickpea and shiitake mushroom soup that can be made on stovetop or in the Instant Pot!

This recipe is a part of my roundup of healthy vegan recipes made with easy to find non-perishable plant based ingredients you most likely have in your pantry right now.

*If you don't have three different types of lentils available, you can easily use 1 cup of regular, brownish-greenish lentils.

**You can omit cauliflower or replace it with broccoli or spinach if you like.

***Red lentils tend to completely disintegrate in this soup, adding to a hearty texture, so in the end you'll only see brown and black lentils floating in the soup.

Hope you enjoyed my easy vegan lentil soup with cauliflower and rice!

This looks so good! What a great lunch prep to make for the week!

can you give me the carbs for this recioe?

Hi Mary, I don't have access to nutrition calculators at the moment (I'm on the road), but you can Google those and enter the ingredients, then divide by the number of servings. Hope this helps!

Alina, thanks for sharing this at the weekly Potluck! I'm a fan of soup ANY time of year and this one looks so hearty and comforting.

Thank you for your kind words, Annie - and thanks for running the linky potluck!